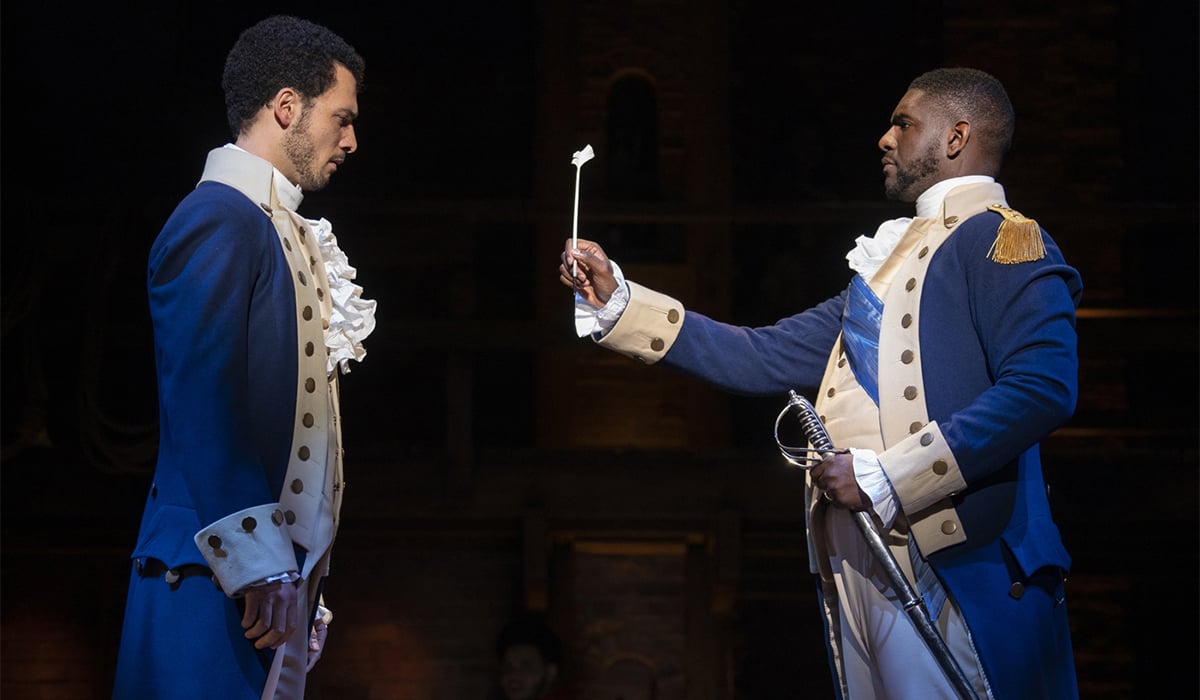 In August of 2015, I was staying in Manhattan on Broadway, just blocks from Times Square, when I was invited by a friend to the premiere of Hamilton. I asked her what the show was about. She had dragged me to a few Broadway clunkers, so I was being cautious about saying “Yes” to another snoozefest for $100 a ticket. “It’s about the revolutionary war,” she replied. Being a history buff, she caught my attention. She continued, “Put to rap music.” She lost my attention. I politely declined.

Six years later, I’m invited to the press premiere of Hamilton through Adelante magazine. After hearing all the fantastic reviews and accolades, especially for Manuel Lin Miranda, the star and creator, I thought, this time, “I’m not throwing away my shot.” My only hesitation this go around was the pandemic. However, like most theatres, vaccination cards are required at the Pantages, as well as masks. The Pantages Theater is an experience within itself, a Hollywood glamour art deco movie palace that’s been renovated several times to its previous glory. It’s been the venue for some of Hollywood’s biggest premieres, such as Cleopatra and A Star is Born, no, not with Lady Gaga – Judy Garland. It’s a majestic setting for something as grand and epic as Hamilton.

Hamilton tells the story of American founding father Alexander Hamilton, you know, the dude whose face is on the ten-dollar bill, the country’s first Secretary of the Treasury. Miranda, who is Puerto Rican and grew up in Harlem, claims he was inspired to write the musical after reading the 2004 biography “Alexander Hamilton” by Ron Chernow. The music is a mashup of hip hop, R&B, pop, soul and of course, traditional show tunes.

I have to confess, the rapping, at first, was a little tough to follow, because they rapped so fast and it’s not contemporary circumstances they are singing about and they often use the old English of yore, mixed in with urban vernacular. Because there is very little spoken dialogue, it’s good to know a little about American history if you can’t decipher the lyrics. My Armenian friend didn’t know what the hell was going on for the first 30 minutes, but loved the show just the same.

There are numerous ballads, where the singing is slowed down to give the listener’s ears time to pick up the story line. The dancing is innovative and sharp, without going on too long. Some musicals have dance numbers that are way over the top to make up for a weak storyline. There’s no weak story line in Hamilton which involves political intrigue, a revolutionary war, treachery, adultery, scandal, and not one, but two infamous duels. That’s a lot of storytelling in a musical, which may explain the reason for 47 songs, with a running time of three hours. Don’t worry, the seats are very plush and comfy and there’s an intermission.

Aside from the rap music, what makes Hamilton so unique is its cast of non-white actors playing our Founding Fathers. Miranda described Hamilton as “America then, as told by America now”. It’s refreshing to see people of color play historical characters with tremendous singing, acting and dancing talent. The costumes are period from the neck down, but from the neck up, anything goes with contemporary hair styles. Only King George wears a powdered wig.
At the 70th Tony Awards, Hamilton, received a record-breaking 16 nominations and won 11 awards, including Best Musical. It also received the 2016 Pulitzer Prize for Drama and a filmed version of the Broadway production, staring Miranda, was released in 2020 on Disney+.
Miranda, however, is not reprising his role in Los Angeles. Jamael Westman plays Hamilton, doing superb justice to Miranda’s hip hop creation. In fact, after seeing the Disney+ recording of Miranda in the lead role, I’d have to say, Westman wins it hands down. He’s very cool and calculating, but also vulnerable. Actor Simon Longnight is also memorable as a cheeky Thomas Jefferson. Joanna Jones plays Eliza Hamilton, Alexander’s wife, her voice is strikingly beautiful. Jones gives a moving and profound performance in the musical’s finale. However, it is King George, played by Rory O’Malley, who steals the show with his historical (hysterical) commentary on the scoundrel seditsious colonists over in America. His droll wit and regal caricature break up the seriousness of the play. Hamilton lives up to its hype with catchy contemporary music, ingenious choreography and reminds us about a man who wrote most of the U.S. constitution, a sacred document we still rely on today for social guidance.

Hamilton runs through Jan. 2. For info and tickets visit: https://www.broadwayinhollywood.com/events/detail/hamiltonla