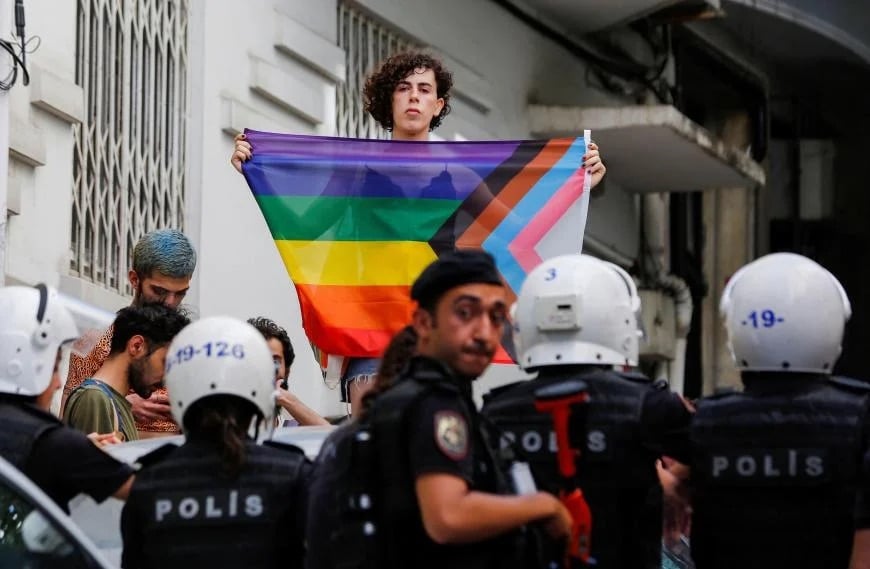 Turkish police attacked and arrested hundreds of people at the Istanbul Pride March on June 26, 2022, in a sweeping display of violence and discrimination against LGBT people, Human Rights Watch said today. The authorities also arrested journalists reporting on the event.

The number of arrests was three times the total during the previous seven Istanbul Pride marches combined. Thirty-four of those arrested were youth under 18, according to Kaos GL, a Turkish LGBT rights group. Local officials had banned the march, citing security concerns and the need to uphold public order. Istanbul Pride, which at its peak in 2014 hosted upwards of 100,000 participants, has been banned since 2015. Despite this ban and a seven-year history of anti-LGBT police violence, LGBT activists took to the streets in protest and to commemorate the 30th Istanbul Pride.

“The Turkish government’s crackdown on Istanbul Pride is the latest in a brutal campaign against LGBT rights activism and freedom of expression,” said Kyle Knight, senior LGBT rights researcher at Human Rights Watch. “Turkish authorities have a responsibility to protect LGBT people and journalists alike, but instead the authorities have acted with aggression and cruelty.”

Before the Pride march, local officials shut down metro stations, ejected people from cafes, and preemptively arrested 52 people just before the parade started. As it began, metal barriers and lines of police in riot gear cordoned off the streets. The journalists’ union, DISK Basin-Is, said that the police beat “many” participants in the march. Police also attempted to prohibit journalists from photographing or recording the event – including by detaining a photographer from Agence France-Presse.

Various human rights organizations reported on Twitter that activists were held in vehicles without air-conditioning for hours and were denied access to food and water. Additionally, Kaos GL reported that lawyers attempting to free those arrested were met with police aggression, prolonging victims’ detention. Some of those arrested were kept in detention overnight, though a robust network of lawyers worked with activists to ensure that all detainees were released within a day.

Earlier in June, at an event celebrating the start of Pride Month, police detained members of two LGBT groups, Istanbul LGBTİ+ Onur Haftası, and Trans+ Korteji, in the Kadıköy district of Istanbul. Trans+ Korteji tweeted that officers at the Vatan Police Station physically harmed the activists, and shared photographs of their bruised wrists and legs.

Similar crackdowns at Pride events have occurred across Turkey this June. Police shut down a film screening that was part of the town of Datça’s inaugural Pride week and physically intervened with those who attempted to make a statement to the media. A dozen people were detained at Izmir’s 10th annual Pride march. In Ankara, police used excessive force and fired pepper balls to break up a student-organized Pride march hosted by a local university.

Previously, the Ankara governor had banned all LGBT events and public LGBT-related discussions in the province from 2017 to 2019. A court lifted the ban in April 2019, emphasizing that authorities have a duty to take security measures to protect peaceful assemblies and events – even if there are concerns that such activities may provoke a reaction – rather than simply to ban them. In Istanbul, the prosecutor filed a lawsuit against 19 protesters who joined a Pride march in 2021; this criminal case is still pending.

The crackdowns at this month’s Pride events follow a series of efforts by Turkish officials to quelch LGBT rights activism.

Turkish authorities are pursuing two lawsuits against the Association for Supporting Tarlabaşı Community Center (TTM), an organization that serves women and children, after they organized an event to address issues related to LGBTI+ children in June 2021. Following this event, conservative media outlets opened a smear campaign against TTM, claiming it was perverse and corrupting children.

Subsequently, the Interior Ministry began auditing TTM, which prompted the authorities to file the two separate lawsuits against the organization, seeking to dissolve it. The Istanbul Chief Public Prosecutor’s Office is pursuing the cases on the basis that TTM has become “illegal and immoral.”

In March, at Women’s Day celebrations across the country, participants reported that police prevented people from bringing rainbow-colored objects, LGBT flags, or LGBT-supportive banners to demonstrations and attempted to stop trans women from joining assemblies. At a daytime assembly, police detained five trans women along with four other women who tried to stop the arrests. The same day, Fahrettin Altun, President Recep Tayyip Erdoğan’s communications director, made an anti-LGBT speech, saying that “Families and children [are]targeted through … tolerance for homosexuality propaganda” and calling homosexuality “ugliness.”

In February, an appointed rector closed down a prestigious university’s LGBT club after weeks of protests against the action, and government officials called students who were arrested for an anonymous artwork with LGBT flags “perverts.”

In 2020, the head of Turkey’s Religious Affairs Directorate gave an anti-LGBT sermon about the Covid-19 pandemic. For the last two years, university students have been prosecuted for participating in a campus Pride march in 2019.

“While LGBT rights activists have demonstrated incredible courage and tenacity in the face of government brutality, they should not have to risk their well-being to exercise their fundamental rights,” Knight said. “The government should defend the right to freedom of expression, including by immediately ceasing all violence and discrimination against LGBT people and groups.”