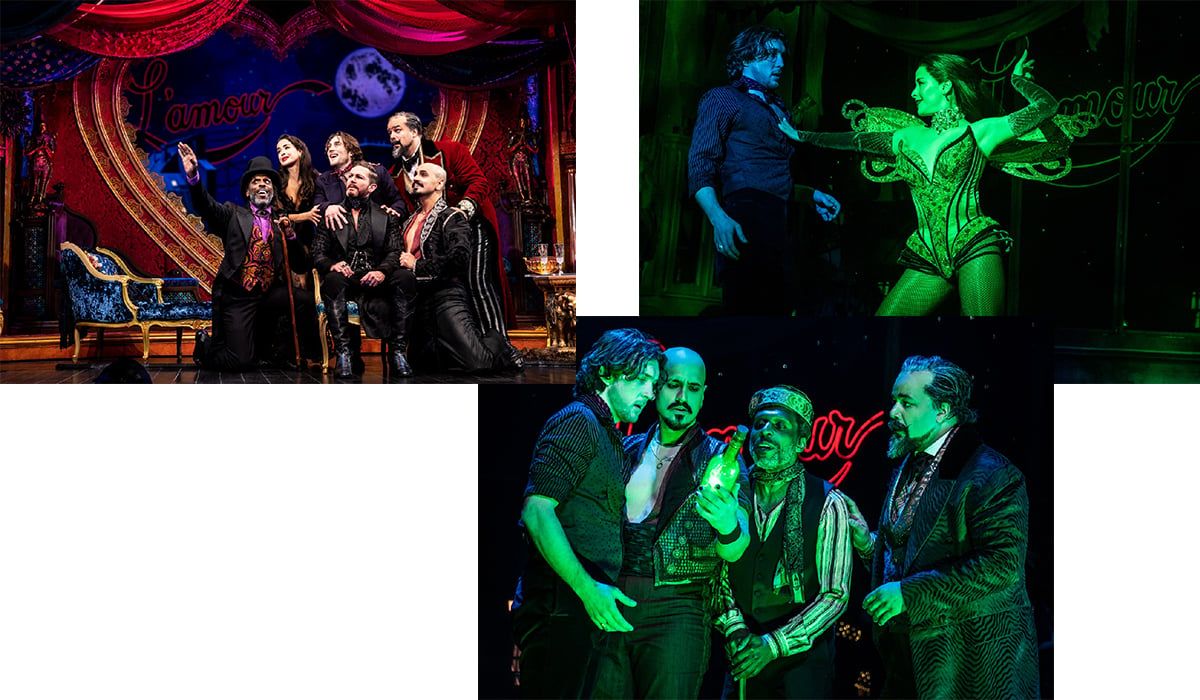 By: Joseph Castel
Photos by: Matthew Murphy for MurphyMade

A total of 70 pop song snippets, made famous by the legendary likes of Madonna, Bowie, Gaga, and Tina Turner, just to name a few, are woven into a dynamic coherent love story with stunning visuals in this staged version of the film Moulin Rouge, playing at the Pantages Theatre in Hollywood until Sept. 4th.

This national Broadway tour is a musical update of new songs from the Nicole Kidman film of the same name. Director Baz Luhrmann’s 2001, film was a provocative leap forward in taking pop standards like Patti LaBelle’s 1974 classic “Lady Marmalade” and Elton John’s 1970 “Your Song” and mashing up their lyrical storylines into a cinematic remake of Giacomo Puccini’s opera, LaBoheme. Luhrmman, who just directed Elvis, threw in some Bollywood panache into the movie Moulin Rouge and practically created a whole new film genre. Unfortunately, it was the slapstick Bollywood scenes in Luhrmman’s original version that ruined the Oscar nominated flick for me.

The Moulin Rouge franchise has struck gold again, this time with Broadway director Alex Timbers who took the helm of this 10-time Tony award-winning stage production. Timbers ditches the Bollywood hoedowns in exchange for more traditional Broadway dance fare. Although the choreography is entertaining like a Vegas Revue on steroids, it’s not the dancing that makes this show a cut above the rest. The songs and the sets are the showstoppers. First, the musical numbers, they’re mega-monster hits. From Marilyn Monroe’s “Diamonds are Girls Best Friend” to the Rolling Stones’ “Sympathy for the Devil,” this musical has a genre for everybody.

As in the movie, iconic pop songs are cleverly spliced and mashed up into a 19th century Parisian love story. A struggling poet, Christian, and courtesan cabaret singer, Satine, try to convince a wealthy Duke to finance their musical extravaganza to save the Moulin Rouge from financial ruin. Initially, Christian (Conor Ryan) is accidentally mistaken for the Duke by Satine (Courtney Reed) and comedic chaos ensues. Thankfully, Timbers tones down the ludicrous slapstick that ruined the movie and instead, focuses on the romantic chemistry between Christian and Satine, which pays off in the tragic ending. Ryan and Reed are phenomenal singers, but its Reed’s vocals that takes on signature songs by Adele, Shirley Bassey, Dolly Parton, and Gwen Stefani and yet, is able to make them all her own.

At first, it may appear gimmicky to tell a story based on snippets of billboard hits, but it works. It’s a lyrical stream of Top 40 consciousness that stretches all the way back to the 1950s. Perhaps it’s the frenetic pace of the singing that keeps the listener hooked, without having to think about the wild juxtapositions of lyrics that jumps genres, or maybe, the creators lean on the premise that every love story is universal, and any silly love song can fill in the lyrical blanks. We’ve become used to flash editing, thanks to MTV. Moulin Rouge, however, introduces us to flash listening.

And the sets? A magnificent magical fantasy. In my 30 years of reviewing theatrical productions, I’ve never witnessed such luscious sets – not even on Broadway. It’s a kaleidoscope of vibrant colors, moving seamlessly from one scene to another. The stage is flanked by a giant red windmill and a massive elephant on the other, with large hearts framing the interior stage like an infinity mirror. Ambiance is everything in this high-octane burlesque circus that doesn’t slow down until the curtain falls on the final can-can.