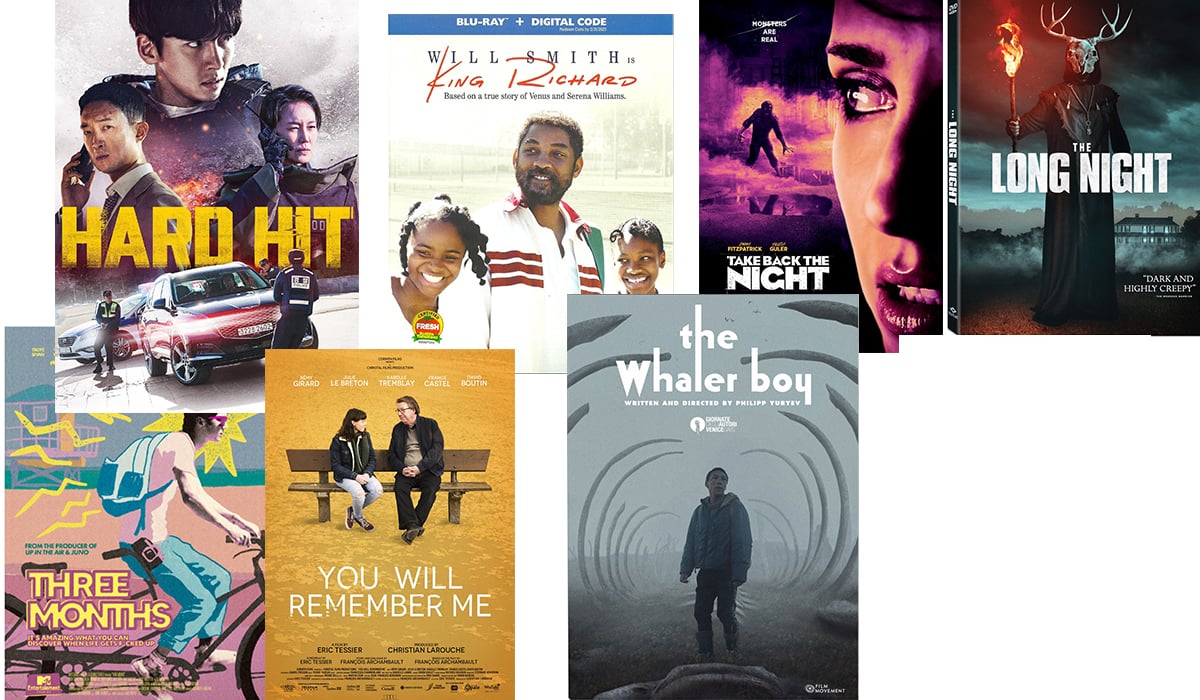 KING REACHARD
Warner Bros. Home Entertainment
Available 4k, Blu-ray and DVD Now
Armed with a clear vision and a brazen 78-page plan, Richard Williams is determined to write his daughters, Venus and Serena into history. Training on Compton, California’s abandoned tennis courts – rain or shine – the girls are shaped by their father’s unyielding commitment and their mother’s balance perspective and keen intuition, defying the seemingly insurmountable odds and prevailing expectations laid before them.

TAKE BACK THE NIGHT
Dark Sky Films
Available on Select Theaters and Digital Platforms on March 4th
Finding herself the victim of a violent monster attack, Jane launches a vigilante campaign to hunt the beast that tried to kill her. Jane’s efforts intensify, but her troubling history of drug use and mental illness bubbles to the surface causing her family, community, and authorities to question the authenticity of her account. Suddenly alone in her fight, Jane starts to doubt her own memory of the attack…to doubt if Monster exists at all.

HARD HIT
Capelight Pictures
Available on Digital, Blu-ray & DVD now
VIP Bank Manager Sung-Gyu drives his daughter and son to school one morning. Along the way, a phone rings from the glove-box. It’s an anonymous caller claiming there’s a bomb under Sung-gyu’s seat and if anyone exits the car, it will explode unless Sung-gyu can pay a ransom. What at first feels like a prank call quickly turns into an edge-of-your-seat thriller. Sung-gyu must simultaneously ensure the safety of his children, find enough money to pay the ransom, and evade the police, all while trying to figure out what he did in his past to deserve this.

YOU WILL REMEMBER ME
Corinth Films
Premiering Via Virtual Cinema on March 4th
A public figure and retired History teacher, is slowly starting to lose his memory. Accustomed to public speaking, he must make himself more discreet, even if he believes he still has a lot to say. Also, since no one around him can watch over him, he is placed in the care of Bérénice, a young girl who is a little rebellious and lost. Their meeting will lead Edouard to revisit a passage from his personal history that he had chosen to forget, and Bérénice to find meaning in her life.

THREE MONTHS
MTV Entertainment Studios
Steaming Now on Paramount+
THREE MONTHS is a coming-of-age film that tells the story of Caleb, as a South Florida teen who loves his camera, his weed and his grandmother. On the eve of his high school graduation, everything changes when he’s exposed to HIV. While he waits three months for his results, Caleb finds love in the most unlikely of places.

THE WHALER BOY
Film Movement
Available on DVD/Digital March 15
15-year-old Leshka (Vladimir Onokhov) lives in an isolated village on the Bering Strait. Like most men where he lives, he is a whale hunter. When internet arrives in the village, Leshka becomes infatuated with a webcam model from America – so far away and yet almost close enough to see across the waters of the Strait. Coming of age in the male-dominated whaling community, Leshka’s encounter with this mysterious woman awakens in him a desire to find love outside of the confines of his tiny world. He becomes determined to meet her in real life, setting forth on a dangerous adventure across the raging waters of the sea.