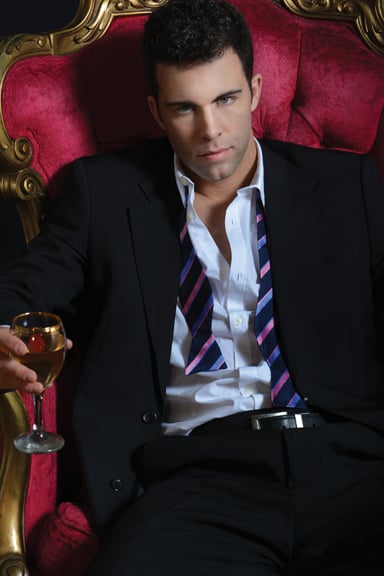 I attended the Get Out Awards in NYC last month to be a presenter. As I’m sitting there talking to someone I hear, coming from the stage, a cover of Drake’s Hold On Were Going Home. I’m trying to hold on to my conversation but I can’t stop looking at the stage at this young man performing. Then his shirt comes off of course he had all my attention then. The man stole the show this year! Singer Ricky Jarman is a talented young singer who demands your attention when on stage. He has the voice, the charm and charisma and obviously the looks to be a big superstar. He’s not only a singer but also an actor, model and dancer. Some guys have all the luck. His latest single, “She’s Gone” is out now. I haven’t been this excited about discovering new talent in years. Ricky has something special and I’d like to share this young man who hails from North Carolina with you.

Samara: When did you first discover you had all these talents for acting, modeling, dancing and singing?

Ricky: I have had a passion for the arts ever since I was a really little kid. I made my first public appearance in 4th grade as I performed “As Long As You Love Me” by The Backstreet Boys. It was an awesome experience! The crowd got really into it. After that I got heavily involved in music, musical theatre, dance, acting, song writing, modeling, and eventually joined a talent agency.

Ricky: Yes I do direct all my own music videos! I love to direct. It’s quite challenging actually, but so rewarding at the same time. It’s such a neat experience to be able to create something from scratch, like you own little masterpiece.

Samara: What is your style of music?

Ricky: My style of music is a Pop and R&B crossover. It’s very urban. Some of my musical inspirations that have helped to shape myself as an artist would be talented individuals such as Michael Jackson, Justin Timberlake, and Earth Wind and Fire.

Samara: What is your latest single?

Ricky: My latest single entitled “She’s Gone” has only been out on the market a few short months now. It’s a tale of the lady Ricky wants to be with, walking out on him. He wonders out loud what he will do without her. Will life go on? Is there anything else to look forward to? He doesn’t know, so he is begging her to come back, so that he doesn’t have to find out. The video encapsulates the feelings of despair and the desperation to do something to get her off of his mind.

Samara: Can we expect a full length album?

Ricky: As a matter of fact, yes you can definitely expect a full Ricky Jarman album coming out very soon! It’s in the works. It’s been a blast making it so far. I’m really looking forward to seeing what all my fans think. The tentative date for the album release is either end the of December or beginning of January.

Samara: You like to incorporate covers with your own material in your performances. Can you tell us about that?

Ricky: I love music in general! Why not support those artists out there who help to inspire me? I incorporate some covers sometimes with my own material because cover songs help to draw your crowd in; especially when you are performing in an area where some people may not be familiar with your music.

Samara: So you’re also a professional dancer. Can you tell us about your dance crew?

Ricky: Yes I do dance. The styles of dance I participate in, is hip hop and jazz. Dancing is a very important aspect when it comes to the type of artist I want to be known as. I’m not just someone who gets on stage and sings a song and then exits. There is nothing wrong with those kinds of singers, but I’m much more then that. I am an entertainer, and as one you should know how to dance as well as sing. The dance company I am with is called KR3TS and they are located in Spanish Harlem of New York City. There is so much talent within that dance company.

Samara: And what about your love life? Your new fans want to know if there’s anyone special in your life?

Ricky: The great thing about love is how much love can be shared, and how many people yearn to feel loved. I just want to say how much I love my fans! Team Ricky Jarman, y’all rock!

Ricky: Yes, please take the time to check out my music on Vevo, MTV.com, Spotify, and Itunes. If you like what you see and hear, please show your support by purchasing your copy today!