Before there were out celebrities like Ellen, Rosie and George Michael there was Elton John, the flamboyant feather-boa-slinging, glitter-glam rocker who first outted himself as “bisexual” during a Rolling Stone magazine interview in 1976. Since then, the not-so-secret life of Sir Elton John has been juicy fodder for the tabloids and an endless source of major media headlines. 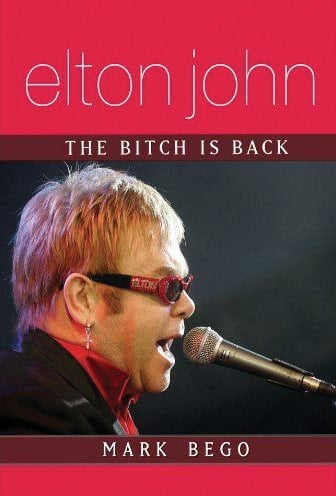 Now all of John’s tiara tantrums, rocky gay romances, mock marriages, sexual trysts, superficial suicide attempts and even the inspirational background stories to some of his biggest hits are meticulously sorted out in a new tell-all biography entitled, “Elton John: The Bitch is Back,” by New York Times best-seller Mark Bego.

Not that “Sharon” (John’s feminine alter-ego nickname) has really gone anywhere in the past forty years. The legendary diva has managed to grace the last four decades with 50 Top 40 hits amounting to more than 200 million units sold. He’s won five Grammys, a Tony and an Oscar for the Lion King. He’s headlined Vegas and has scored the Broadway musicals AIDA and Billy Elliot, as well as creating one of the world’s leading AIDS foundations that has given $125 million to support programs in 55 countries.

Despite John’s noncooperation on the unauthorized book, Bego nevertheless paints a poignant picture by piecing together dozens of past articles on the rocker as well as conducting new interviews with those closest to the ‘70s icon.

Bego’s repertoire of 54 biographies includes musical giants such as Michael Jackson, Cher, Madonna, Bette Midler and Mary Wilson of the Supremes. Although most of Bego’s books are unauthorized, he is still considered one of the most prolific and reliable writers in the music business, and The Bitch is Back is a marvelous account of the rock Mozart of our time.

Bego chronicles how the Princess of Pop blossomed from a pudgy musical prodigy named Reginald Kenneth Dwight into a self-promoting rock giant with a little help from his friends, particularly lyricist Bernie Taupin (his first platonic man-crush) and manager John Reid, with whom he had a covert real love affair. Most of John’s hit songs with Taupin took only minutes to write once he had the lyricist’s magic words in his hands. And while many of John’s biggest hits were about Bernie Taupin’s life (“Tiny Dancer,” “Goodbye Yellow Brick Road,” “Your Song”) there were a few memorable songs pertaining to John himself.

The song “Sorry Seems to Be the Hardest Word” was about his breakup with John Reid. His 1975 hit “Someone Saved My Life Tonight” was based on John’s feeble attempt to kill himself over a 1969 engagement to a pickle heiress (the sexually confused John popped his head in the gas oven with all the windows open). And “Blue Eyes” was not about blushing bride Renate Blauel but another male lover.

Bego’s first few chapters on John are compelling reading, as they detail John’s childhood, from when his mother first discovered that her three-year-old son could mimic a Classical waltz on the family’s upright piano to how John’s musical genius became a wedge between himself and other children as he grew into a nerdy teenager who preferred his collection of vinyl records to his boyhood friends.

John’s take on sex as an adolescent was a frightful one, as he was deeply confused about his sexuality. “At school I used to have crushes on people, but not really any sex at all, male or female . . . I never had any sex education . . . At school everyone boasted about sex. Meanwhile, I was dying to be molested by someone. . . . just to teach me, just to find out, you know?”

The real payoff in this bio is the story of John’s covert sexual relationships with his manager and the male lovers prior, during and after his sham of a marriage in 1984 when he wedded a woman just to appease his mum. Most fans don’t know about John or any gay celebrity’s intimate relationships, but Bego pulls out all the twisted wire hangers from John’s closet. It’s obvious that Sir Elton’s battered emotions from childhood and adolescence took a toll on the insecure performer’s personal life.

One of John’s lovers, an Aussie hottie, just kept taking John’s assortment of abusive behavior: infidelity, drugs, bulimia binges (the smell of vomit on John’s fingers), and the cruel abandonment of marrying Renate while still involved with the Aussie. The young man was able to strike back at John by writing his own memoir of the mistreatment by the obnoxious lover.

Besides the familiar rags-to-riches success story, Bego’s bio on John is really about a talented man who desperately wants to be loved, despite his insecurities and accomplishments. Bego reveals that John was unable to find or appreciate that love until he could learn to love himself, as he did when he finally checked into rehab, became clean and sober, confronted his sexuality, and found happiness with husband David Furnish in 1993.

The Bitch is Back is a reflective image of the fear and isolation many gays experience while growing up in a repressive heterosexual climate, regardless of their talents and despite the contributions they may be able to make to the world.

Bego’s book, unfortunately, doesn’t go into details on John’s relationship with Furnish, whom he married in 2005, but it’s still a fascinating read for any Elton John fan, and a perfect Valentine reminder about all the things a person shouldn’t do to his or her lover.